Row In Caves Underneath The City Of Tapolca

Tapolca, a small town located on the northwestern shore of lake Balaton, in western Hungary is marked as the new ‘must-visit’ destination on many wander-lists.

The kind of perspective it offers with the UNESCO World Heritage sites, lakes and endless cave systems are just apt for those who have been vaccinated against adventurous trails.

This place, surrounded by Basalt hills might seem unspoiled and quaint but beneath it, there’s a sophisticated undercurrent— Tapolcai Tavasbarlang (popularly known as the lake cave of Tapolca).

Unlike any other caves which exert pull on to Indian Jones emulators or spelunking enthusiasts, this cave system offers you a good amount of majesty as it has a very innovative way of traveling through its labyrinth i.e. by rowing a boat.

Many people visit this place only because of this twist. Why wouldn’t they? After all, you don’t get to row a boat in a subterranean cave on every vacation you take!

Long hidden from the view, this cave system was discovered accidentally, in the year 1942 when a baker Pál Tóth and bricklayer Ferenc Németh stumbled on it while digging a well for the new house. Later when scientific exploration was conducted it was realized that the air and water in the cave are much warmer than other caverns of the area which made the scientists more curious.

Subsequently, they found the deposition of Sarmatian limestone alternating with marl layers on the inner walls of the caves which were around 13.7 million years old. These sediments were deposited by the one-time Sarmatian sea and covered the 210-130 million-year-old Upper-Triassic dolomite, from which cold karst water arrives at the region of the Tapolca Basin. 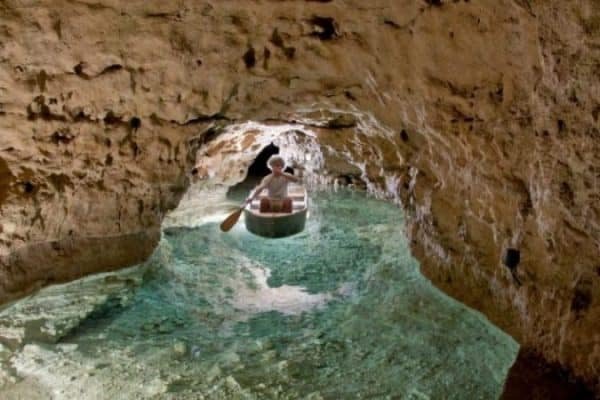 The same dolomite rock was also found several hundred of meters under the surface which gives way to the groundwater. As a result of the post-volcanic activity, water warms up to approximately 40°C and surges up through the fissures.

The volcanos of the area are already extinct and represent a prominent element of the landscape i.e the Basaltic hills, also known as the witness hills as they are the principle remaining evidence of the time of the lava flow. The mixing of two water supplies results in an 18-20°C water temperature, enabling the water to create the passages and favourable conditions for Speleotherapy.

Another interesting factor is that there is no other cave of similar size underneath a populated settlement around the world, and is also known as the medicinal cave for it heals respiratory and asthmatic diseases. Yes, there is a hospital underneath which conducts Speleotherapy— a therapy which involves curing chronic respiratory and asthmatic disease by breathing mineral infused and carbon dioxide rich air. The air in the cave is pure, pollution-free and is also open to the guests who stay in Hotels connected with the cave system

The pond cave is estimated to be about 4 kilometers long, 2.5 of which is accessible by the boat.The mysterious world of caves is well explained at the visitor’s center, which you have to by default visit as it is right there before you sink in for the boat ride. The visitor’s center is all about the internationally unique Tapolca Lake caves and makes you watch a few 3D videos for you to feel like you are going on some underground expedition.

Though they terribly fall flat in their attempt as the movie is in Hungarian and many visitors fail to understand a word. However, an exhibition called “Wonderful Karst” is also displayed in the visitor center in German, Hungarian and English. This unique exhibition has many special attractions which are carved up into 10 rooms. Each room depicting the wonderful world of karst regions right from dripstone room to cave diver’s room. In the end, to witness all the information that you have gathered, you can finally get yourself amused by the boat ride. As you walk down the stairs carved into the lake cave, you can spot the well that led to the discovery of the cave system. The lukewarm water springing in the cave ensures a constant 20 ⁰C temperature throughout the smaller and bigger halls of the dry section. Visitors eager to take a romantic boat ride can paddle on the dimly lit, bluish underground lake in a metal boat and enjoy the view simultaneously.

Avoid taking pictures as the ride lasts for just 10 to 15 minutes and you surely don’t wanna miss out on some bizarre sights. For you will be lost in the manner nature chisels its way out aesthetically through the cracks and crevices in the earth. Some of the tunnels are so narrow that sometimes the boats have to almost squeeze through the passage. Though many visitors don’t find it all that great but for first-time visitors, it is always a big hit. “Once in a while a spindle-shaped Common Minnow fish can be sighted if you’re lucky”, says a local. Well, let’s just hope that you are. So, if you are planning to visit this epitome of hidden beauty then just book your tickets online, one day prior to the visit to avoid unnecessary queuing.